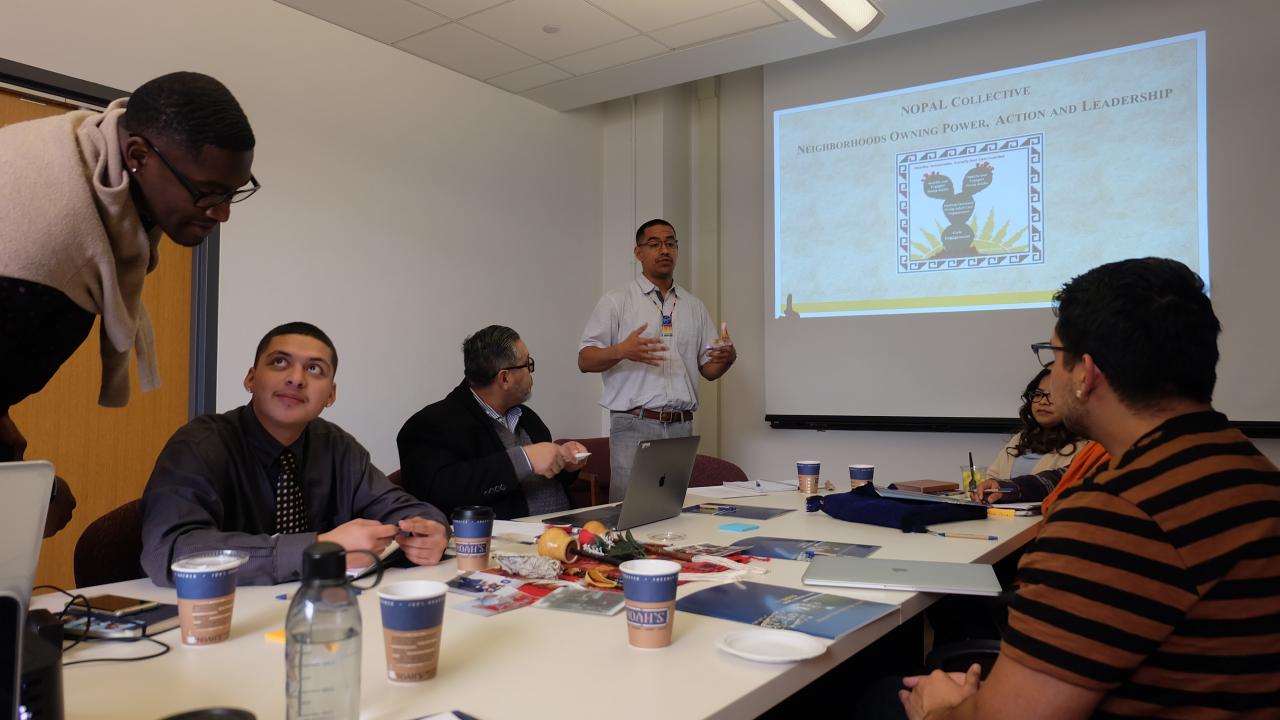 George Villa embodies kindness. And not in the way a stranger is kind for holding a door open or your grandma is kind for baking cookies.

After spending a day at a juvenile correctional facility in Stockton, Calif. doing healing work and sitting in traffic to get back to Davis, Villa spoke gently. He sat calmly, but there was a palpable passion surrounding everything he spoke about.

“One thing that people are now figuring out is that those that have been directly impacted in the system or impoverished communities [must] have all the right tools that are needed to build healthy communities, to engage, to be a part of the decision making process, to be [at] the table, not on the menu,” Villa said.

This requires more authentic relationships between institutions and communities. The Center for Regional Change, acting as a UC Davis non-profit organization, leads by example on campus in this effort. Neighborhoods Owning Power, Action, and Leadership (NOPAL)*, a collaboration between the CRC and four other Central Valley organizations, is just one way the changemaking partnerships manifest.

As a Latino who has experienced incarceration, was raised in a Central California community and grew up in poverty, Villa described himself as a “bridge” between NOPAL fellows and the CRC. From communication and logistics coordinator on the NOPAL project to doing local legislative visits to volunteering at the Davis Migrant Camp in the summer to running his own non-profit gym back home and more, Villa has many “buckets of work.”

The common denominator that drives all this time he dedicates to move his community forward is where he came from and how he was shaped by circumstances. Just like those he seeks to help, Villa too has been stereotyped and marginalized. It wasn’t until he was a grown man that he first heard someone describe all people, including him, as “sacred.”

“I have a lot of influence, even over my professors, of the work that I've been doing,” Villa said. “But I think also of how I'm grounded in my dignity everywhere I go.”

Yet to get to this position of being able to empower, Villa had to look inward first.

“Before I even got inside the community to do work and to try to support people, I had to take care of my internal dialogue,” Villa said. “I knew my soul was lost. I knew that I had a lot of things I was carrying from child to adolescence to adult. I express myself, I cry, I go to ceremony, I go to sweat lodges, I try to support our elders when they're having ceremony. So it takes a lot of work [...]”

He was originally drawn to the CRC because of the center’s “resident focus” and consideration for the groups it is attempting to study but ultimately benefit through their research.

“[The CRC isn’t] like the typical university affiliate where they just extract information [...],” Villa said. “I like how they're grounded in community resolutions and also they're about building partnerships, bridging the silos and building bridges between community and academia.”

Villa ended on how “grateful and glad” he is to be a part of the Center for Regional Change. Here, his roots are celebrated because the region, often the Central Valley, is key to contextualizing injustices and how critical change should unfold.

“Regional change to me means being able to look beyond city limits more in the areas that are extremely underserved, like the rural area. As we know a lot of outskirts are unincorporated, so they don't receive city funds. And there's also a big unemployment problem with the regional. We've got some urban areas that are underserved, but it's the regional that I think we need to also have in the conversation.”

Support the CRC and our continued goal to support the building of healthy, equitable, prosperous, and sustainable regions in California and beyond by making a tax-deductible donation.